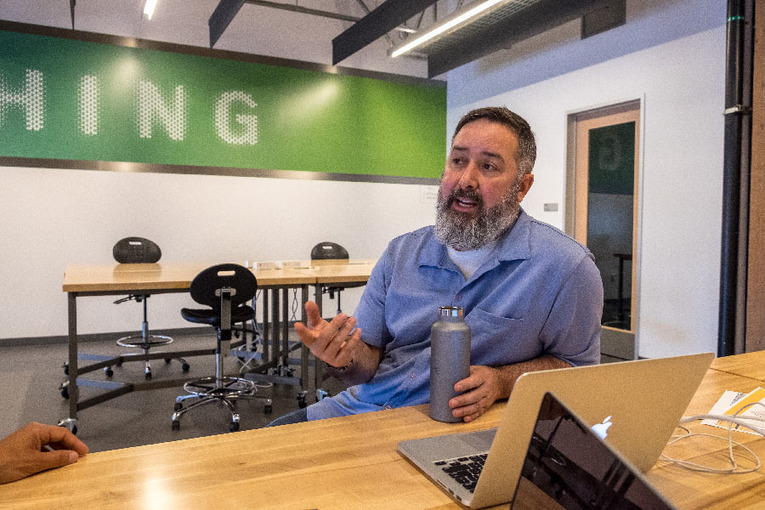 Rick Turoczy’s name is synonymous with Portland’s startup scene. He publishes the well-regarded Silicon Florist blog and in 2009 co-founded the Portland Incubator Experiment, a multifaceted business incubator and collaboration between startups and corporations. In May Turoczy teamed up with 3D manufacturer Autodesk and the creative agency Uncorked Studios to launch PIE Shop, a spinoff for companies building physical products.

“Everything tends to be thematic with me,” says Turoczy, who highlights a few big-picture motifs — collaboration, coaching — in a career that’s taken him from literary agent to tech-marketing guru and urban thought leader. The Portland Innovation Quadrant, a proposed science and innovation corridor in the Central Eastside, is one of several development projects he’s thrown his weight behind.

In these edited interview excerpts, Turoczy, 46, talks about the evolution of PIE, moving from software into hardware and beyond and how the tech sector’s “moral compass” crisis is the suburban-sprawl challenge of our time.

O.B.: Not many people know you worked as a literary agent.

R.T.: I came out of college as an English major and had designs on literary pursuits, as an editor. The town I was in — there was a literary agent. I worked about two and a half years in that business. At that time there was a really interesting power dynamic between Chicago and New York and everywhere else, which is similar to the power dynamic I exist in today, where there is San Francisco and everywhere else.

I learned a lot. Wow: That is not what I thought it was. It wasn’t about creativity or talent being rewarded. It was about what will sell. It opened my eyes, and I didn’t want any part of the publishing world any longer.

O.B.: There’s a lot of angst today about the role of the liberal arts in a STEM- and tech-driven economy. What’s your take as someone who has closed the gap?

R.T.: The liberal arts teach people how to learn. You learn how to juggle a variety of topics simultaneously. I see liberal arts as having most applicability to early-stage companies, founder level, where you’re having to do all things for the business.  In terms of local community, Reed College develops more early-stage founders in our community than other institutions.  Look at [Reed graduate] Luke Kanies from Puppet. He founded the company, grew the company to a certain level and grew it successfully.

Entrepreneurs and technologists are no different than writers. They are expressing themselves creatively through a medium.  It’s just that in terms of the tech medium, business took the lead, and then you creatively express yourself toward that business. As opposed to saying: This is my creative outlet and maybe I could make money from it.

R.T.: [Laughs] Lacrosse coach and literary agent. And nanny. All that simultaneously. Nanny — it’s like taking care of an early-stage child, teaching people how to do their stuff. It’s all coaching and editing.

O.B.:  How did you jump from marketing to PIE?

R.T.:  I got involved in the open-source community. There were lots of talented creative people not interested in promoting or describing the products they were building, but I found it super compelling. So I started blogging about stuff I saw. For whatever reason, [Silicon Florist] struck a chord at that point in time. And it was because of that blog that Wieden + Kennedy reached out to me and a few other folks in the community. They saw an opportunity for the agency to learn both from cultural and technical aspects. And from the startup-community perspective, folks were looking for an opportunity to collaborate and work from the same space. So it was from that PIE was shaped and formed.

O.B.: And PIE became part of the zeitgeist.

R.T.: It did. It was weird. The blog was total serendipity. The PIE conversation was total serendipity.  We did co-working for a while, until that didn’t seem like it was working. I was lucky to have a bunch of really talented folks over my 15-year marketing career who wanted to give back to the community, but there was no infrastructure. That became the serendipity that moved PIE to the next phase. And after we did that for four years, we were getting more interest from other programs, who would say: “Hey, you built that accelerator thing. How do we do that?”  That resulted in the PIE Cookbook, an open-source guidebook on how to build accelerators.

And now we’ve gone back to the accelerator model: How can we be close to the founders? Working with programs was compelling, but we were always at arms’ length from actual entrepreneurs. And that wasn’t as fulfilling.

O.B.: But the model is also evolving — again.

R.T.: The accelerator model is typically a set three-to six month engagement period. We have eliminated that to see how quickly or slowly they need to stay. We’re also testing people who are still working a day job and this is a side project.

Another dynamic we happened on accidentally but is really interesting. We had a couple of startups who had children during the course of the program running, so how does that dynamic change the founding team’s life when one of the founders has a new kid.

R.T.: I would love to do a day care center. I think it is a largely overlooked aspect of getting more people engaged in early stage ideas.  We have half-jokingly said we need a day care associated with the accelerator. I think that has potential.

O.B.: Talk about the origins of PIE Shop.

R.T.: When we started PIE, hardware was a really tough problem to solve. There was a disconnect; the types of companies that were being built at PIE were software-driven. The hardware community didn’t feel like they had a place to engage there.  It was always my goal: How do we get this vast amount of knowledge, largely in the suburbs, involved in what’s going on in the central part of the city?

I was trying to get hardware to appreciate software, and what’s actually happened is the software community has started to appreciate hardware. It took not simplifying hardware but making hardware more accessible. We’re in the process of selecting companies.

O.B.: Earlier you mentioned the tension between Portland and the Bay Area.

R.T.: Not tension. The Bay Area is obviously a hub of innovation, where you see a lot of things being tried or programs being developed that tend to work because of the dynamics of the Bay Area. The danger is us trying to borrow or copy when we don’t have the same ingredients to put into that recipe. If we figure out stuff that works in Portland, it’s more likely to work more places than the Bay Area; if we can figure out how to do startup acceleration in a small metro area without a venture-capital community, maybe Omaha can do it, or St. Louis or Strausberg.

O.B.: Where are we in that evolution? Has Portland figured out how to do it?

R.T.: I don’t think we are and don’t think we ever will be. There isn’t one model. We have a Harvard and everyone is replicating Harvard. But we don’t have a community college or a state school or a focus-point kind of school. We haven’t explored different applications enough.

It would be a dream come true if, for this kind of startup support mechanism, we were where we have been previously for urban development and design. If we could hit upon a few things: We did it this way, and because of that, 40 years later, we have this amazing city, and we wouldn’t have been able to do that without all the preplanning.  It’s kind of the Portland Plan for Portland startup support. The same way that people talk about urban growth boundary or Pioneer Square. That remains my objective: to hone in on repeatable programmable elements.

O.B.:  The relationship between tech and the city has changed dramatically since PIE launched.  Industry challenges focused initially around lack of venture capital, a startup ecosystem. That morphed into an internal critique about lack of diversity. Now we’re questioning the fundamental value of technology and the sector’s impact on livability.

R.T.: Everything tends to be thematic with me. By way of analogy, tech startups today, these kind of moral compass issues, are like suburban sprawl in the ‘70s and ‘80s. I think one of the challenges with the prevailing model, is it’s really designed a lot around consumer-facing products, the Facebooks, Twitters. Portland doesn’t build a lot of those companies; our stuff is business to business, behind-the-scene engineers building other tools for engineers. So we’re already at a different trajectory.

For right or wrong, a lot of the tech industry was driven by financial motivations; not “Does this need to exist?” or “Should it exist?” but “Can we make money off of it?” A lot of companies built here fell into that idea, that everyone raises venture capital and everyone grows really quickly.

O.B.: And you see that changing?

R.T.: I see a lot of them rethinking that; maybe we should focus on revenue and profitability, rather than growth at all cost. Or focus on community engagement and giving back so when our employees aren’t at work, they have a good city to live in and play in. It’s not perfect and still messy but seems to be moving in the right direction.

O.B.: Local companies might feel that way. That’s not necessarily true for the national firms setting up shop here.

R.T.:  The challenge Portland faces now is the regional offices. They are not in tune with the underlying cultural aspects of Portland. It’s just a lot of really talented well- educated people they want to hire. But with the increasing number of regional offices, that decreases the number of locally founded companies. We need to figure out that dynamic. But I’m confident that it will swing back the other way. People might say:  I’ve worked at said regional office for 3-4 years, put a little money aside and this artificial intelligence thing really interests me, or Blockchain.  But we need the market to reveal itself before the pendulum starts to swing.

O.B.: How can you apply lessons learned from PIE to other types of collaborative projects?

R.T.: Manufacturing is one thing. I’m really bullish on the Portland Innovation Quadrant because that has always been PIE on steroids. PIE has always been: “How can established organizations collaborate with startups?” but that has always been focused on tech. With IQ, it’s everybody; it’s educational, food and beverage, apparel, real estate developers, artists. It feels like an interesting expansion in a vertical way.

R.T.: We’ve got Zidell Yards, OMSI doing a new campus, the Broadway corridor with the old post office, Albina Vision: The entire face of the city is going to change drastically over the next 5-10 years. If we’re not thoughtful or intentional about that, we will wind up repeating past ills of the city. It feels critical to me.

With the influx of folks, it’s a weird, growing-pain moment. We need to work through them but can’t lose sight of where we should be going. Again, it’s like planning in the 1970s. I want us to be doing stuff now that in 30 to 40 years, people are like, “Wow: I’m really glad they were thoughtful about that because it’s a better place for everyone.”

O.B.: The trick is how to be thoughtful when tech moves so fast.